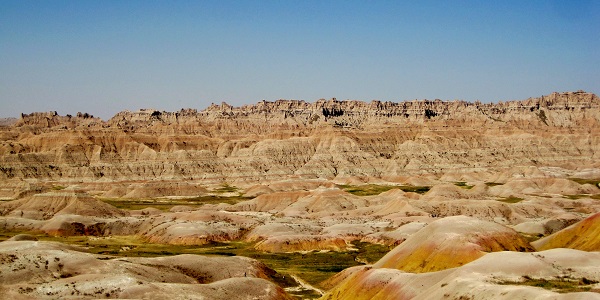 “They call it The Wall (not to be confused with Pink Floyd’s Wall). It extends for a hundred miles through the dry plains of South Dakota—a huge natural barrier ridging the landscape, sculptured into fantastic pinnacles and tortuous gullies by the forces of water. Those who pass through the upper prairie a few miles north might not even know it exists. Those who traverse the lower prairie to the south, however, can’t miss it; it rises above them like a city skyline in ruins, petrified.” (National Geographic) 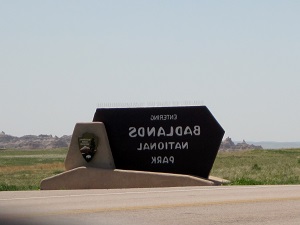 One would think that a National Park could get a little thing like signage right!

We didn’t get a picture of the sign coming in the other end of the Park, so we took this one in the mirror leaving. Clever – huh? 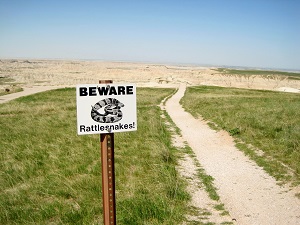 The Badlands are part of the Outlaw Trail leading from Saskatchewan, Canada to Mexico forged by Butch Cassidy and the Hole-in-the-Wall Gang (including Mary’s grandmother’s boyfriend – the Sundance Kid), the South Dakota Badlands isn’t for sissies. 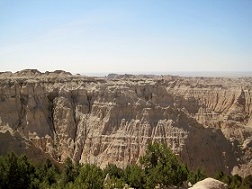 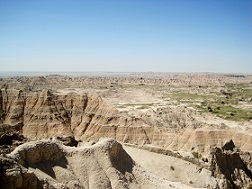 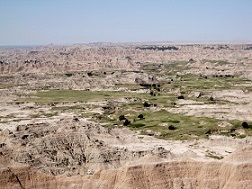 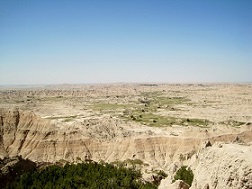 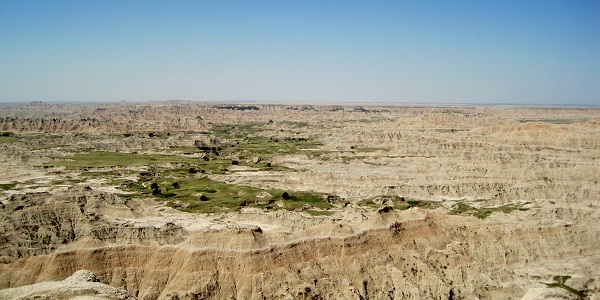 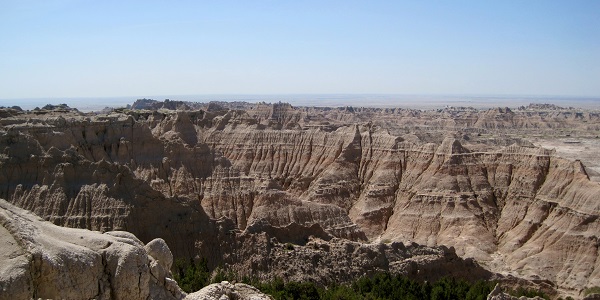 Interesting piece of trivia: The 1973 movie “Badlands” staring newcomer Martin Sheen along with Sissy Spacek, followed loosely the killing spree of Charles Starkweather and his girlfriend, Caril Ann Fugate, in 1959.   And, we continue to bring you interesting facts to astound your friends: Badlands National Park contains the world’s richest deposits of fossils from the Oligocene epoch (the transition period between the earlier and later Tertiary period – ain’t that great?). Paleontologists have uncovered the remains of ancient three-toed horses, tiny deer-like creatures, turtles, a saber-toothed cat and Martin Sheen’s toe nail clippings.  During World War II, the South Unit area of Badlands National Park was used by the army as a practice aerial bombing range. Despite cleanup efforts, the South Unit still contains some unexploded munitions. (Told you it wasn’t for sissies – well maybe Sissy Spacek.)

Being fearless, we mounted our trusty steed and ventured forth. 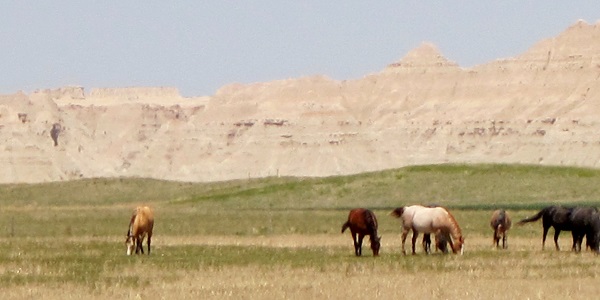 No!  Not those this: 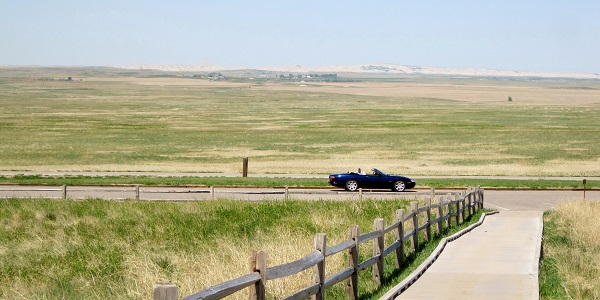 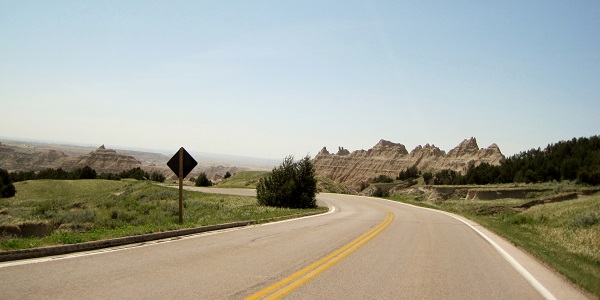 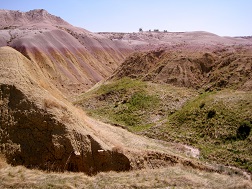 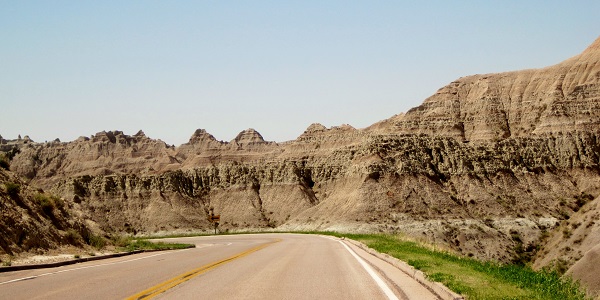 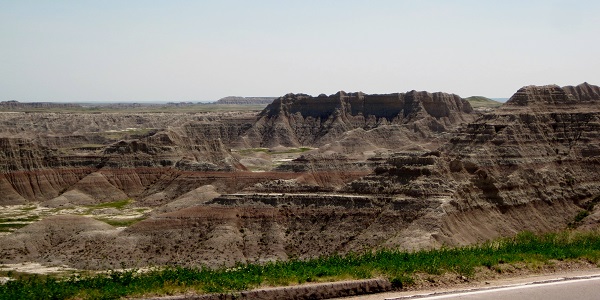 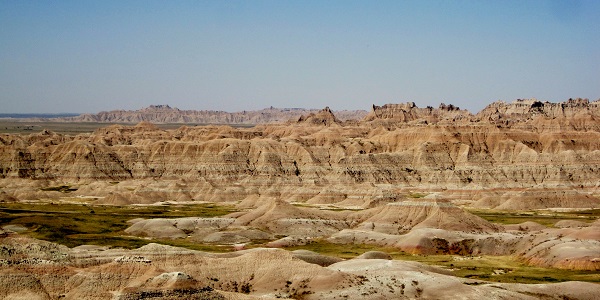 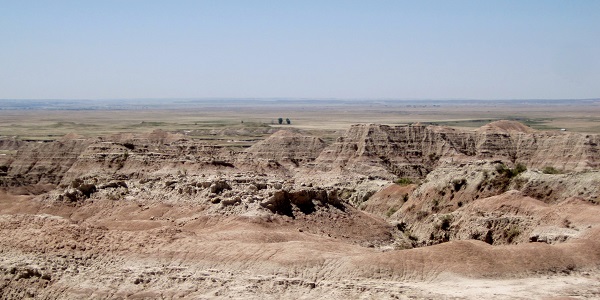 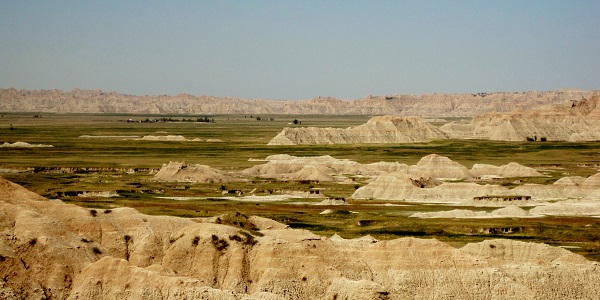 Frolicking in the Mako Sica: 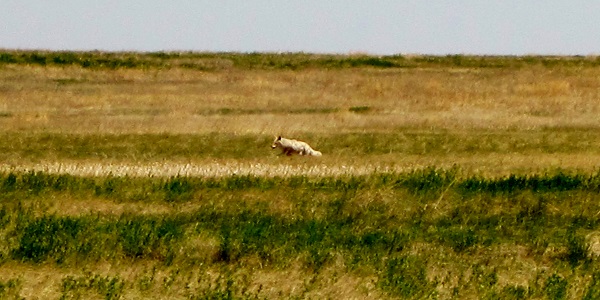 Pausing before heading on: 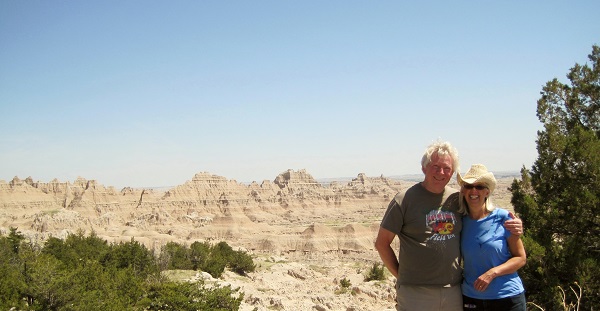 on the road again:

and away we go..getting the right side of the sign.

Near by is the Minuteman Missile Museum: 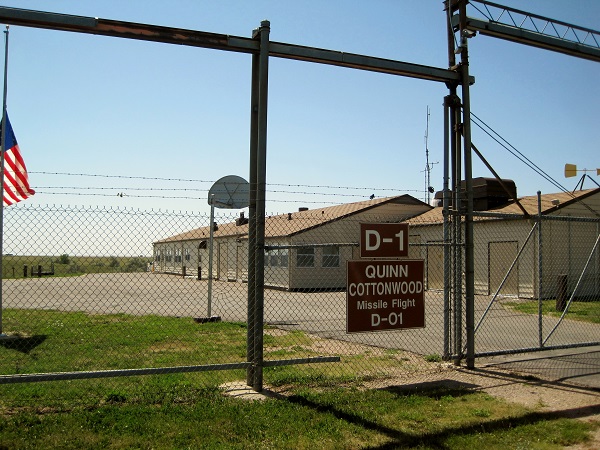 There were once 1000 of the Minuteman II Missiles spread over North and South Dakota, Wyoming and Missouri. Today there are 450 Minutemen taken their place. As a side note it took 1000 Minutemen to equal the Titan II system that I was a part of – just saying.. 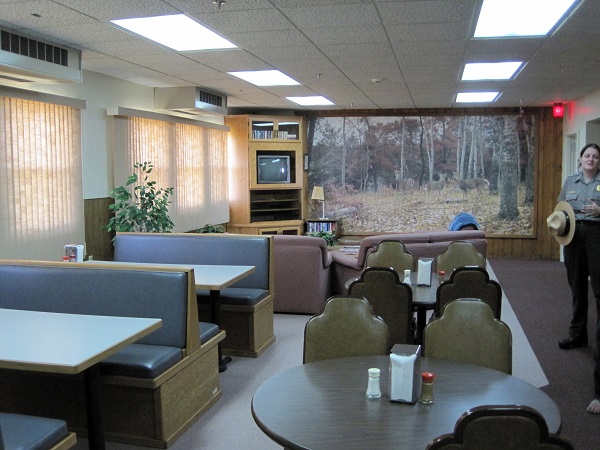 Nice restaurant above the control capsule though… 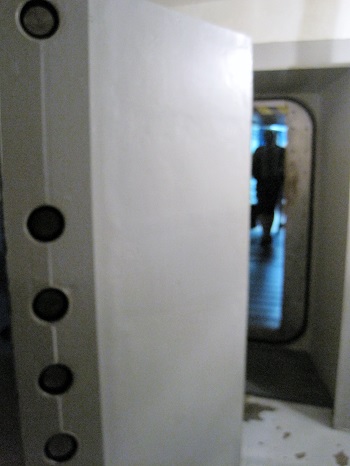 to get into the launch control capsule you took a small elevator from the “restaurant” above and entered through a series of blast doors.

the capsule itself was a big sewer pipe laid on its side and stuffed full of racks of electronics, communications equipment and barely enough room for the two launch control officers whose job it was to make people glow in the dark. Each Control Center controlled 10 missiles with 1.2 megatons warheads. (much like our government’s budget, its hard to visualize really large amounts of things. A megaton is the explosive power of one million tons of TNT..or 4 billion sticks of dynamite…. still can’t see it? how about a train of box cars over 10 miles long. Titan II’s warhead was the equivalent to a train of cars 100 miles long..Now think about what a trillion dollar budget is. The stuff you learn here is just great!) 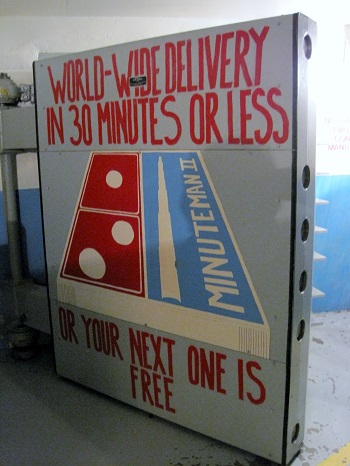 Fun time was over and once again we hit the road: 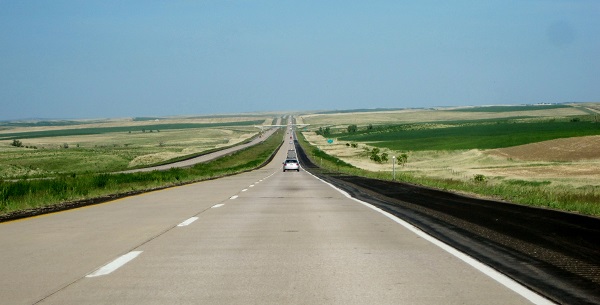 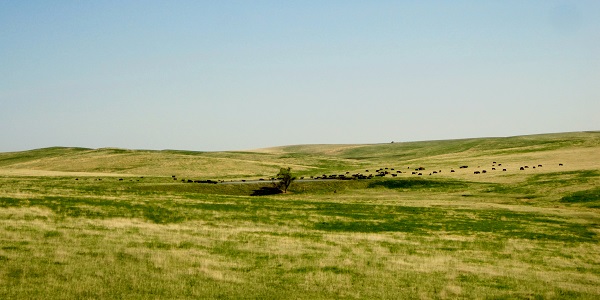 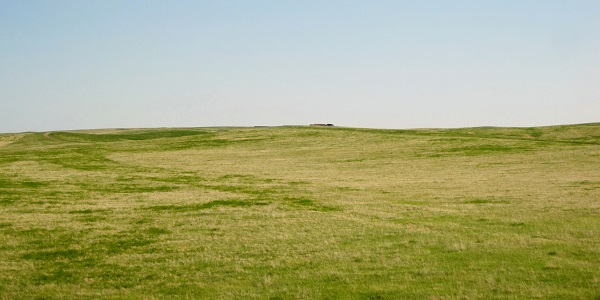 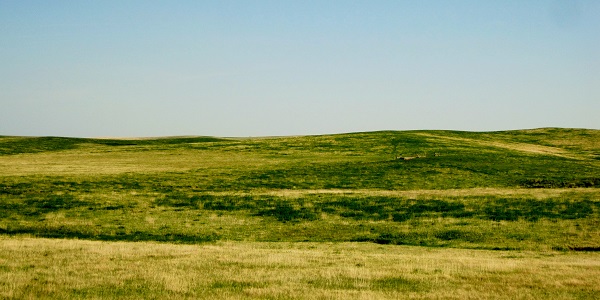 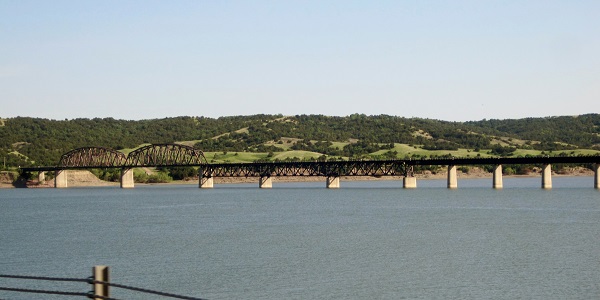 Into Mitchell, South Dakota and the World’s Only Corn Palace: 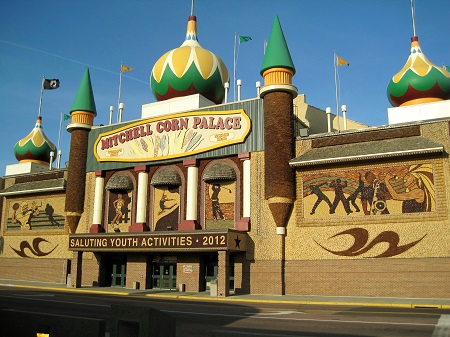 Why someone would build a Palace for corn is anybody’s guess. However: “For over 120 years, the World’s Only Corn Palace has attracted the unusual, the notable, and the road-weary. This year, this whimsical building will undergo a royal transformation before your very eyes!

In addition to the annual redecorating, parts of the Palace will be under corn-struction while we work to bring an even greater experience for you to visit. New ear-chitecture, new interactive exhibits, and a new, welcoming design will make the Corn Palace more exciting than ever. The theme of 2015 is “South Dakota’s 125th”.  (Quote shamelessly lifted from the Corn Palace websight http://cornpalace.com/.) I don’t know, seems a little corn-y to me and yes, the murals are made of corn. An interesting side light in 1904–1905, the city of Mitchell mounted a challenge to the city of Pierre in an unsuccessful attempt to replace it as the state capital of South Dakota.

In 2007, the Corn Palace received $25,000 in DHS funding for a camera system useful for many purposes including, as reported by the Mitchell Daily Republic, to protect a “new Fiberglass statue of the Corn Palace mascot Cornelius” in 2009.

I wonder if the Corn Palace also got a MRAP and grenade launchers?

Well enough with the cornpone, on with the trip!…… Well maybe not…ya see someone else wanted my camera and “borrowed” it never to be seen again (I hope they enjoyed the rest of the pictures). So… we rolled through Minnesota and into Wisconsin, saw a really weird bunch of structures in the field along the highway.. looked a lot like some sort of devil worship stuff.. might have been the freedom from religion foundation headquarters.  Down into Illinois, we bypassed Chicago by driving through the county till we were 50 miles south and then went east until Indiana then home. Nor much to say about all that, except we were glad to be back in Michigan.

Thought I would leave you with this: Happy Trails