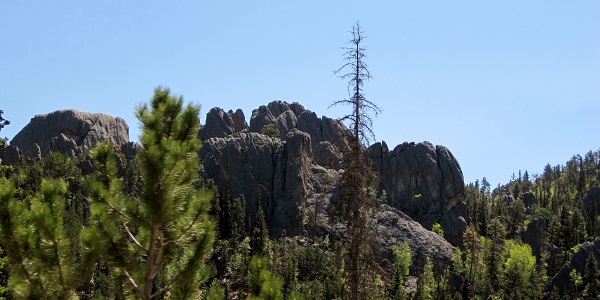 We dragged ourselves away from the crazy horses and made our way along Route 16 to Custer State Park named for …… wait for it…… George Armstrong Custer.  Custer State Park is the largest state park in South Dakota and a really cool place. No! I mean that. I would have liked to have stayed awhile to really check it out but……

Needles Highway is within the park and is named after the needle-like granite formations that the road winds through.

The roadway was carefully planned by former South Dakota Governor Peter Norbeck ( when was the last time you heard of a politician doing…you know…actual work), who marked the entire course on foot and by horseback. Construction was completed in 1922. 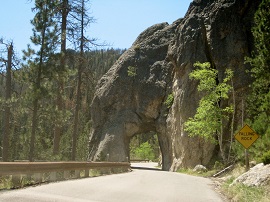 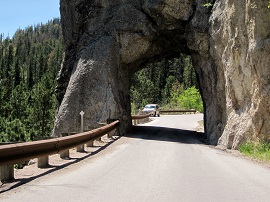 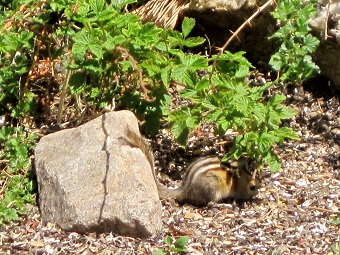 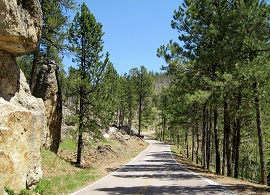 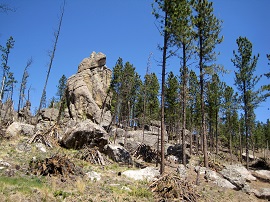 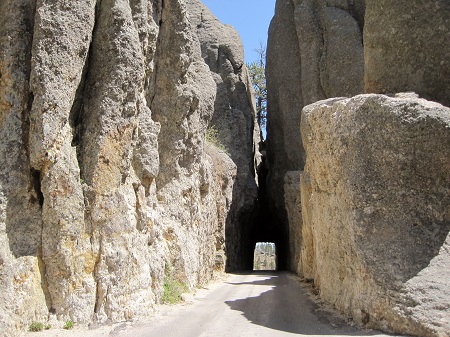 Yes, the tunnel really is 6 inches high and 4 inches wide! 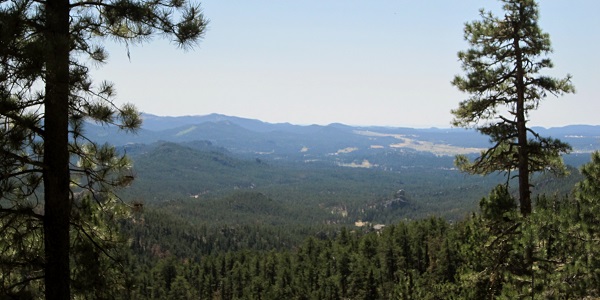 but we squeezed thru… 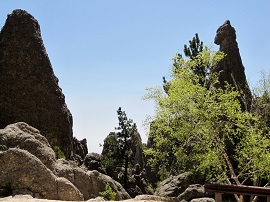 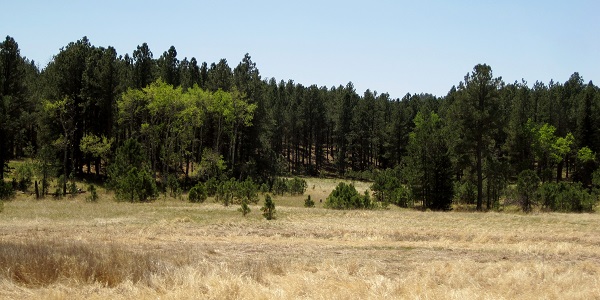 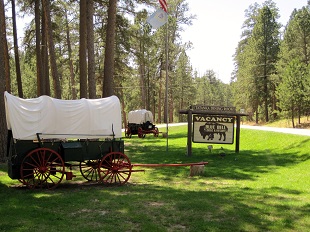 We had lunch at the Blue Bell Lodge in the Park. 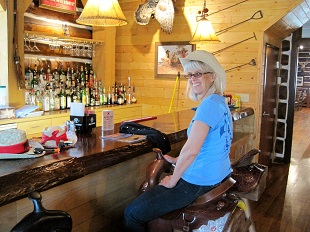 Blue Bell Lodge advertises itself being “as comfortable as a pair of old blue jeans”.

Mary thought the saddle stools was a nice touch.

After lunch we started out again, I was driving and kinda gawking out the left of the car when Mary said “do you think you should STOP!” …..or something like that.

So I stopped. Somewhere in the back of my mind I heard our friends in Montana saying “Buffalo don’t do fences…they just go thru like they weren’t there. Sitting there I was wondering if they did Jags. 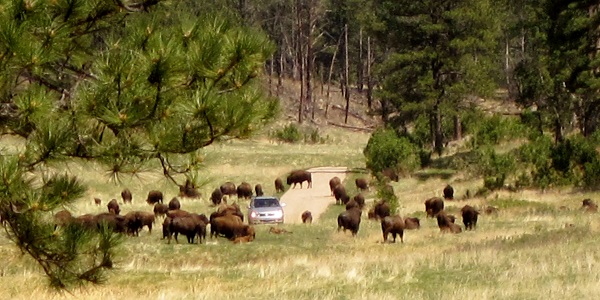 How should I know I don’t speak buffalo!

For some strange reason I decided to take this gravel fire-trail road thing that the Jag just loves…. 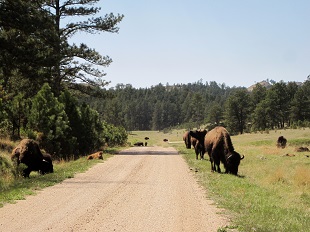 …and came upon this… 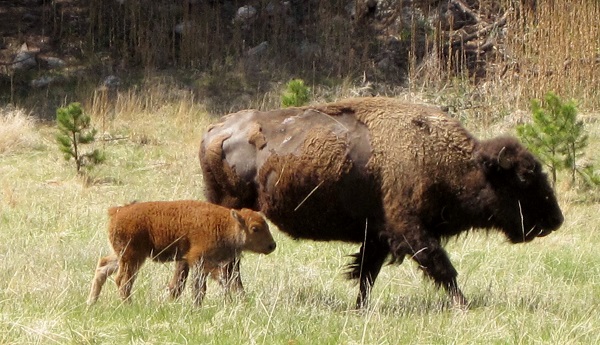 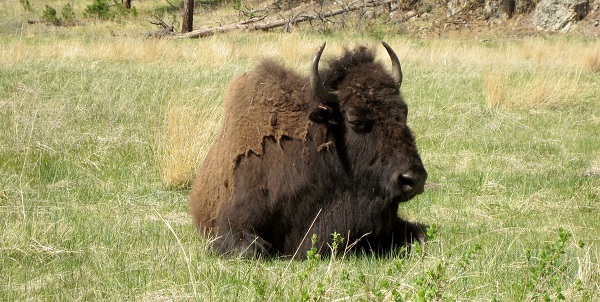 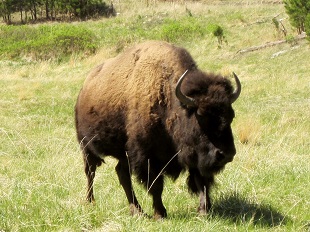 Oh, come on now!  You know who the first great philosopher from what is now Oklahoma is!  Just think about it a little bit.  Want a hint?  “The only difference between death and taxes is that death doesn’t get worse every time Congress meets.”  Still don’t know?  Try – “Everything is changing. People are taking the comedians seriously and the politicians as a joke.”   Stumped?   How ’bout  “I never met a man I didn’t like”.

“There is nothing as stupid as an educated man if you get him off the thing he was educated in.”  Will Rogers

It is amazing to me how much Will Rogers’ comments from the 1930’s apply to today. Goggle him sometime!

We skated on down the road….

and found where the deer and the antelope roam: 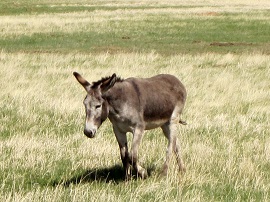 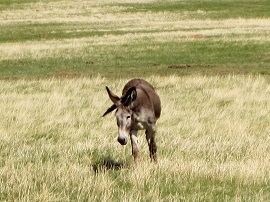 Something in the bushes:

Heading out of the Park: 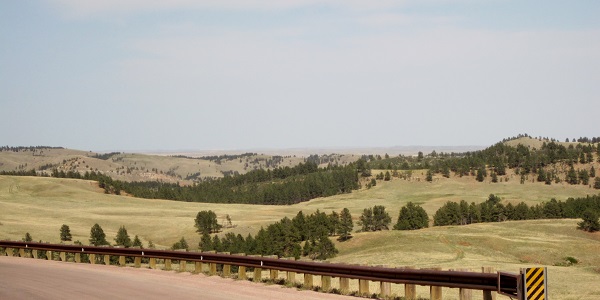 Wait! Wait! This just in!  You too, can own your very own fence busting, chip making, rootin, tootin living souvenir of the American West. A one time only – never to be repeated, invitation only, must be present to win, blue light special, midnight sale, so easy a caveman can do it, it takes a licking and keeps on ticking,…. where’s the beef?, ….whew!….Sorry got carried away there in the excitement. The park has an annual buffalo roundup and auction in September of each year (Sept. 26, 2014) in which the bison in the park are rounded up, with several hundred sold at auction.

So bring your checkbook if you dare! 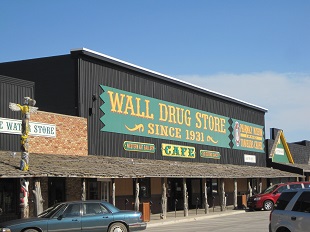 Wall Drug Store, often referred to simply as “Wall Drug,” is a tourist attraction located in the city of Wall, South Dakota. It is a shopping mall consisting of a drug store, gift shop, restaurants and various other stores. Unlike a traditional shopping mall, all the stores at Wall Drug operate under a single entity instead of being individually run stores. The New York Times has described Wall Drug as “a sprawling tourist attraction of international renown [that] takes in more than $10 million a year and draws some two million annual visitors to a remote town.” 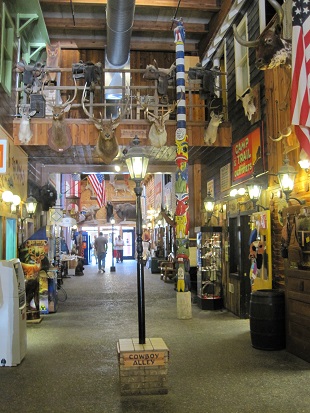 The small town drugstore made its first step towards fame when it was purchased by Ted Hustead in 1931. Hustead was a Nebraska native and pharmacist who was looking for a small town with a Catholic church in which to establish his business. He bought Wall Drug, located in a 231-person town in what he referred to as “the middle of nowhere,” and strove to make a living. Business was very slow until his wife, Dorothy, got the idea to advertise free ice water to parched travelers heading to the newly opened Mount Rushmore monument 60 miles to the west. From that time on business was brisk. Wall Drug grew into a cowboy-themed shopping mall/department store. Wall Drug includes a western art museum, a chapel based on the one found at New Melleray Abbey near Dubuque, Iowa, and an 80-foot  Apatosaurus that can be seen right off Interstate 90.

Ted Hustead died in 1999. The following day, the governor of South Dakota began his annual State of the State address by commemorating Hustead as “a guy that figured out that free ice water could turn you into a phenomenal success in the middle of a semi-arid desert way out in the middle of someplace.”  So now you know a lot more about Wall Drugs than you ever thought possible. Don’t you feel better? 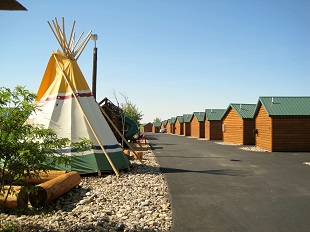 Our home away from home in Wall..

…inside… even the towels matched… 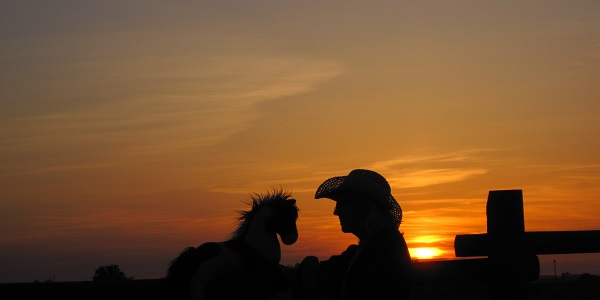