We woke up bright eyed and bushy tailed, hopped on 199 North out of Crescent City for the great State of Oregon. If we had more time (hey we’re retired, I thought we had all kinds of time) we would have continued up the Oregon coast on 101 as we had been told it was stunning. Maybe a trip specifically to do that? Anyway we went looking for Oregon: 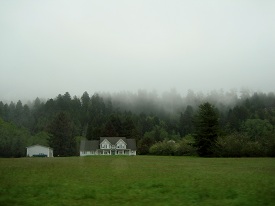 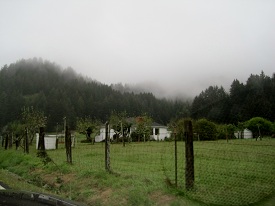 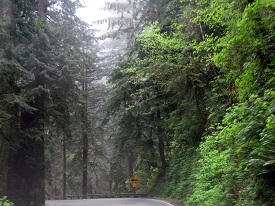 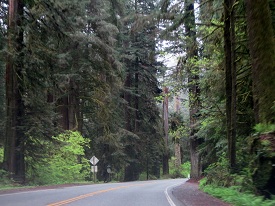 We followed this river: 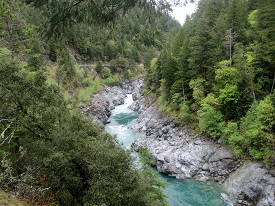 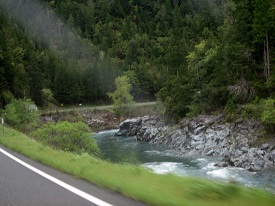 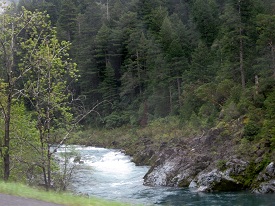 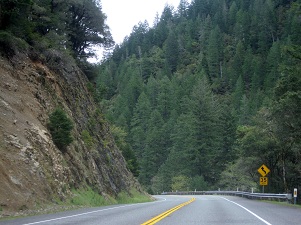 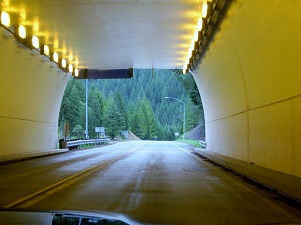 went through a tunnel.. 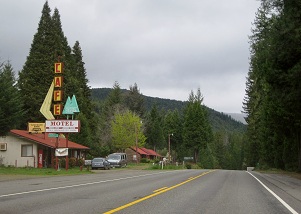 …and then we think we found it. .. the GPS said we had crossed into Oregon. The “Almost Heaven” Cafe/Truck Stop/Motel/RV Park (with full hookup)/Welcome Center and Coke Machine was on our left.

..came over the hill and had to “jam on the brakes” to avoid the O’Brien, Oregon speed trap. Luckily, the LEO was inside taking a break.

Because we were in such a hurry to get to Montana (Mary’s brother Rex lives in Montana), we decided to run on I-4 up to Portland. These are some shots on the way to the I-4: 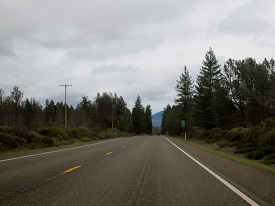 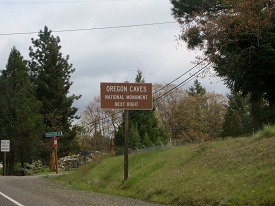 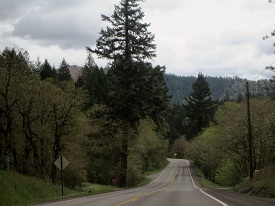 As you can see it was a bit overcast, which is pretty much par for the course for the area. 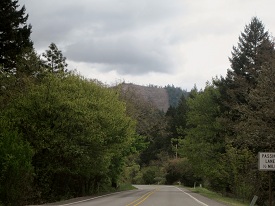 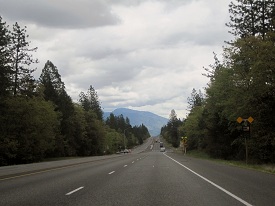 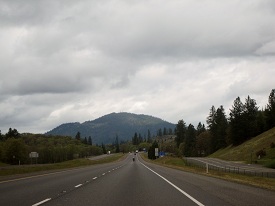 The thing about expressways, and one of the reasons we have tried to avoid them as much a possible, is ya tend to get bored after awhile and attention wanders: 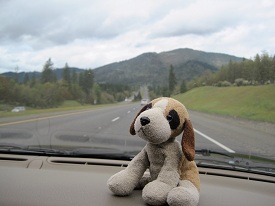 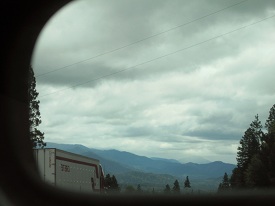 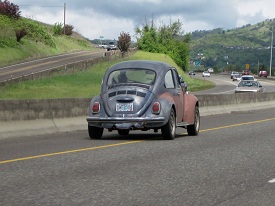 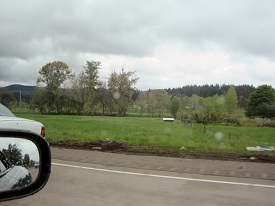 Even the crew got bored and wanted to pose for a picture. Say hello to Duck, Lambie, Deer, Puppy, Horse, Dopey  Snuggs, Turtle and Roo. Roo is destined to belong to our newest granddaughter, Abby. While in the womb, Abby was called Roo by her parents, Pam & Charley. 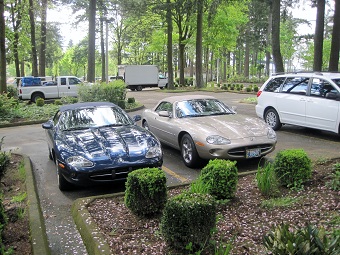 We made it to Portland, actually Wilsonville, just south of Portland. The Jag found a friend.

We stayed in the Quality Inn (nice place) for a couple of nights. The sun came out -off and on – and it was cool.

We went for gas and learned something:  I got out, reached for the nozzle and this young man came out and said “I’ll get that for you sir…You can’t pump your own gas in Oregon”   Whoa Nellie!! Back the bus up! What da ya mean I can’t pump my own gas??  As the young man told me, it was against the law in Oregon for a “civilian” to pump his own gas. Oregon says it’s “OK” to pump something into your veins to commit suicide but it’s not OK to pump gas?? Does Oregon think the general driving public is to incompetent to pump their own gas? OK, might have a point there.

I have to admit my first reaction was just a tad over-the-top. After further review I discovered that way back in 19 and 51 Oregon passed a law that only trained employees of service stations were allowed to put “Class 1 Flammable Liquids” into cars.” The people of Oregon have had numerous chances to change the law but like it that way.

While standing there and talking to the young attendant I began to think .. “This is kinda cool” .. I actually do remember when this was normal.  You stopped at the station and someone would come out with a rag in his back pocket and ask “filler up?”  And I’d say with “ethyl”. Gas was only 25.9 cents a gallon so why not the “good stuff”. Then he would check the oil and clean the windows, might even check the air in your tires. I was awoken from my reminiscing when the young man said “all done… that’ll be $63.50.”   I asked the young man what he thought about the law and he said ” I have a job”. What more can you say?  When we got back home I asked my gas station owner friend why he didn’t bring back the “attendant”. He just looked at me like I was some kind of nut.

Oh, the part about checking the oil and cleaning the windshield – I just made that up.

Next up the Columbia River Gorge