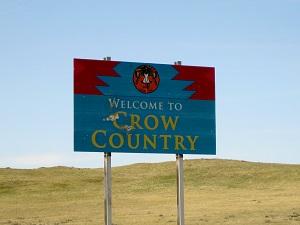 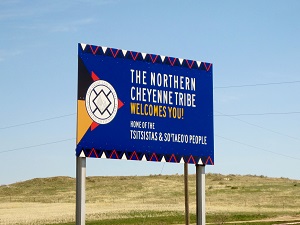 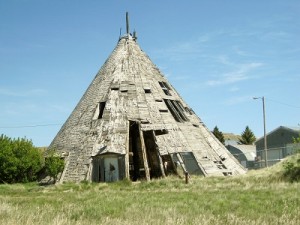 I’ve already mentioned the poverty of these places so I won’t again. The pic to the right is an illustration of the plight many of the Plains Indians. It is not a tee-pee, it is not even an occupied building, it is just a symbol. 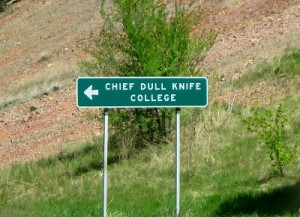 ..but there is Chief Dull Knife College.

Named after Chief Dull Knife, whose Cheyenne name translated to Morning Star.  He was noted for his active resistance to the Federal government. 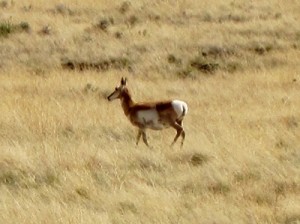 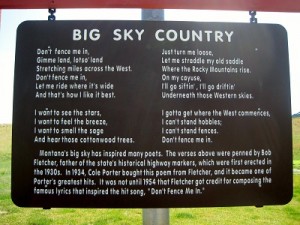 Did you know Don’t Fence Me In was written by Bob Fletcher, a Montana State Highwayman.  -no not that kind He did the State historical markers in the ’30s. Cole Porter bought the poem from him and penned the song.

I put together a video montage of some of Montana for you as we leave the State. hope you like it and Roy Rodgers.

John Coulter (member of the Lewis & Clark expedition – remember them?) sent a description back East of the Yellowstone region and was thought to have made it all up.

Wyoming was named by a guy in Ohio because of a poem written about a woman in Pennsylvania – “Gertrude of Wyoming” which talks about the Wyoming Valley in Pennsylvania . Ya’ just can’t make this stuff up.

Wyoming is the 10th biggest but the least populous – so if you need elbow room..

It has the nation’s first National Park – Yellowstone in 1872. Do you know what the               second National Park was?  Mackinac Island, Michigan in 1875 (pronounced Mac-i-naw     and later turned over to the State of Michigan to become Michigan’s first state park).

The continental divide forks in the south central part of the state in an area known as the Great Divide Basin. The waters that flow or precipitate into this area remain there and cannot flow to any ocean. So if you flush there’s nowhere for it to go?

Nearly half of Wyoming is Federal land, which is us, so go get a chunk. 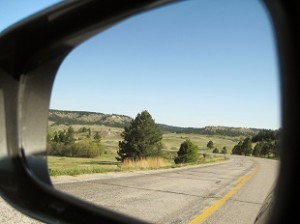 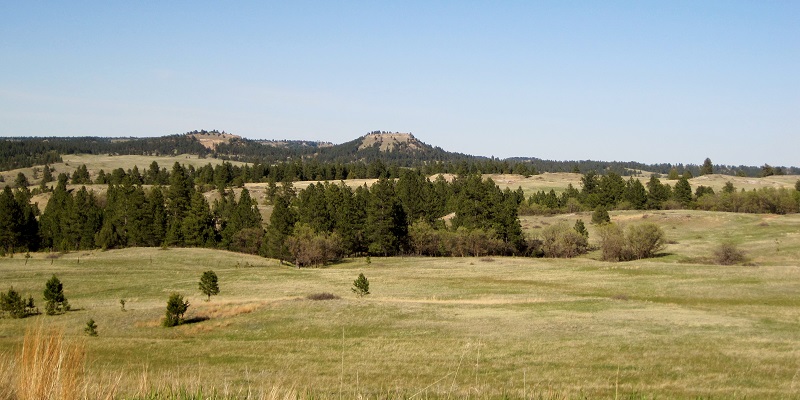 …but soon we began to see trees and things.. 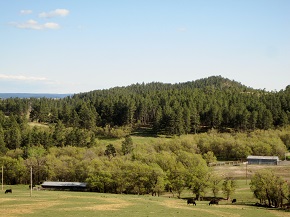 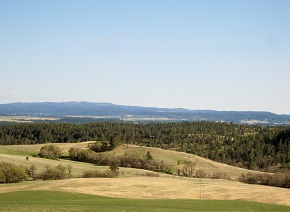 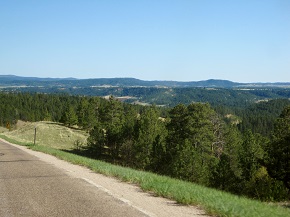 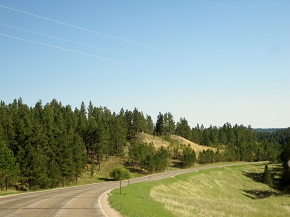 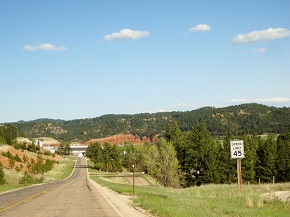 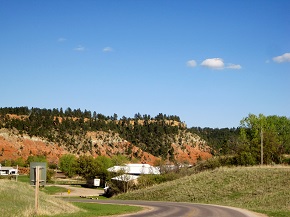 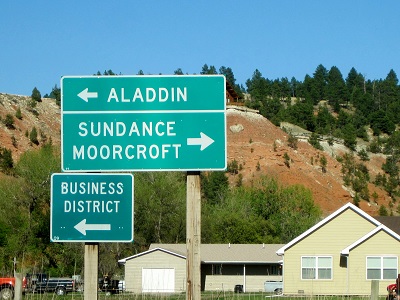 ..and the road to Sundance. There was a road to Aladdin but we didn’t have a lamp with us. 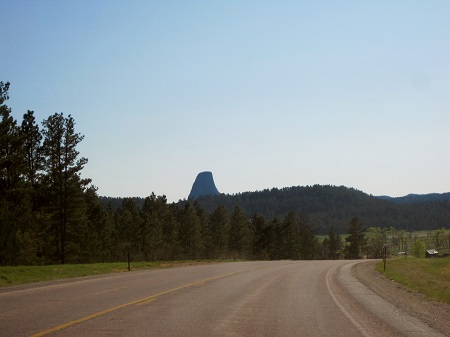 The road took us right by Devils Tower 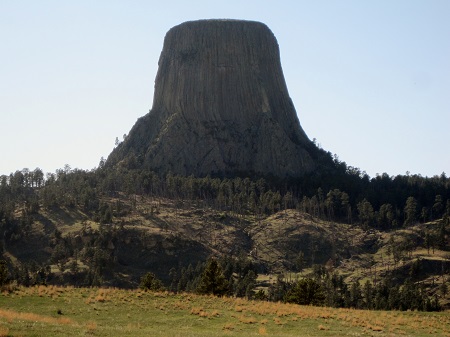 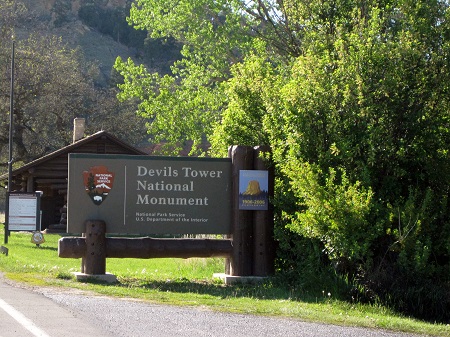 The gate was open and the only guards were these guys: 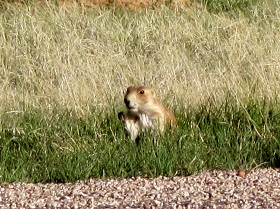 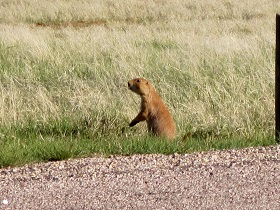 So we went in. 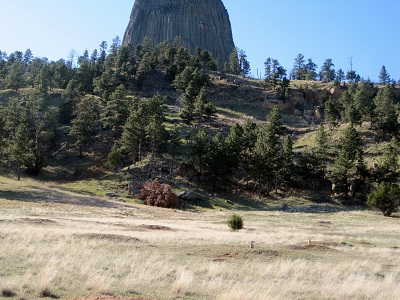 Geologists agree that Devils Tower was formed by the intrusion of igneous material, but they cannot agree on exactly how that process took place.

igneous – formerly molten: describes rock formed under conditions of intense heat or produced by the solidification of volcanic magma on or below the Earth’s surface. Careful don’t strain your brain! Did you see the Prarrie dog town. The road to Devils Tower goes right through. Wonder if the gov’t paid for the right-a-way? 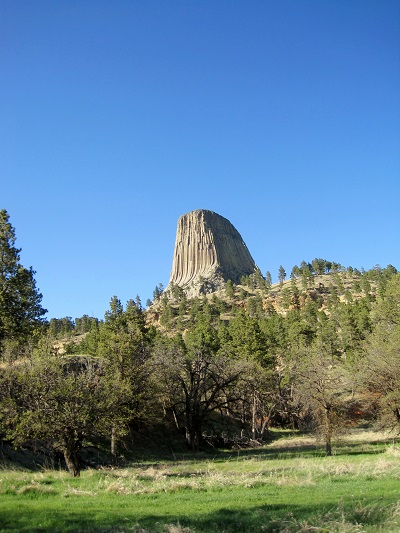 While geologists can’t quite figure out Devils Tower or as the Lakota call it, Grizzly Bear Lodge. The Tribes tend to agree in form as to how the Tower came to exist. According to the Kiowa and Lakota Sioux, some girls went out to play and were spotted by several giant bears, who began to chase them. In an effort to escape the bears, the girls climbed atop a rock, fell to their knees, and prayed to the Great Spirit to save them. Hearing their prayers, the Great Spirit made the rock rise from the ground towards the heavens so that the bears could not reach 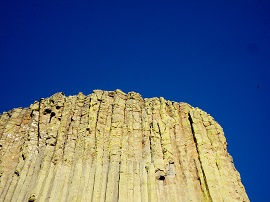 the girls. The bears, in an effort to climb the rock, left deep claw marks in the sides, which had become too steep to climb. (Those are the marks which appear today on the sides of Devils Tower.) When the girls reached the sky, they were turned into the star constellation the Pleiades. So  there ya go not only an explanation for “Grizzly Bear Lodge”, but one for the Pleiades constellation.

More of the “Lodge Tower” thing.. 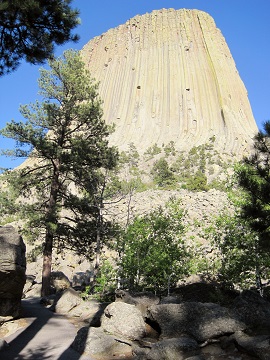 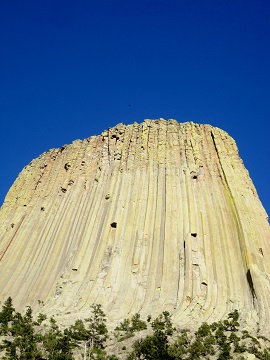 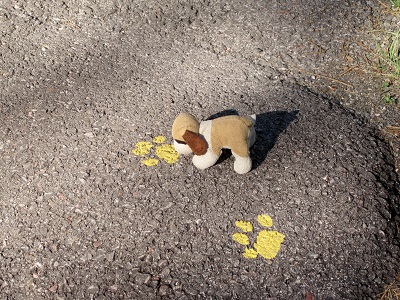 The ever diligent Puppy thinks he may have found the tracks left by the bears. 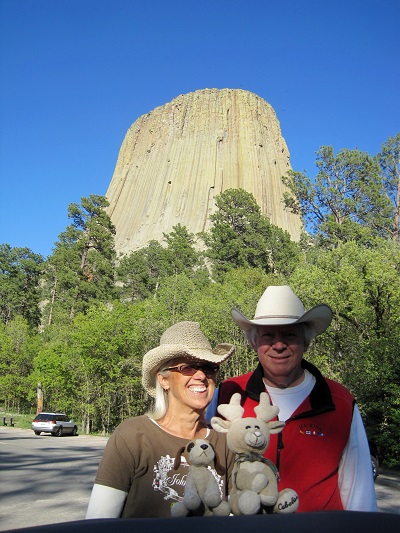 We just fit right in. Don’t we?

As we were getting ready to leave some younger folks came back to their car after having climbed the Tower. We were going to climb up too, but it was getting late and we hadn’t had dinner yet and the sun would have been in our eyes. Anyway Mary asked them what was up there. After considering if they should tell us or not (our previously stated reasons not withstanding) they did. One of the group, obviously the jokester among them, said there was a Holiday Inn and a new McDonald’s up there. But we all know what’s really up there – don’t we? 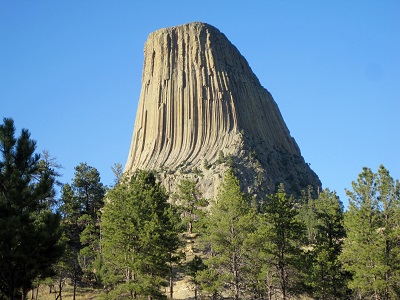 Thinking it was best to vacate the premises before weird things started to happen, we made our way back down.

But then we had our own “close encounter”..

Well, gotta go. Mary has a date with the Sundance Kid and I’m playing poker in Deadwood.