We wanted to spend some time with Mary’s other brother Rex, who lives in Vaughn, Montana, just down the road from Great Falls. Vaughn is just a little bit east of the Rockies and you can see them when you ride up onto the “bench”.

Maybe this sign on the door to the gas station/souvenir shop/ice cream place will give you a clue! 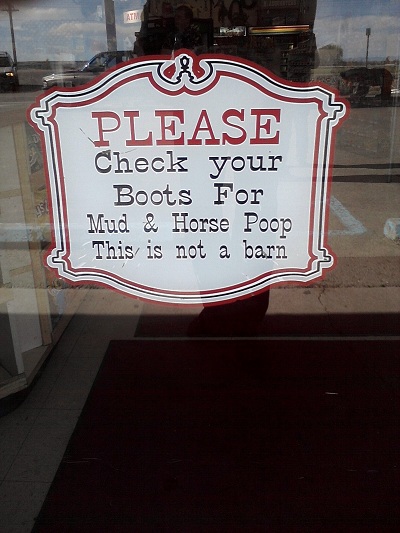 That is not to say Vaughn isn’t without excitement. While we were there, we had a house fire (that the entire community attended – sorry no pic’s way too incriminating), a helicopter landing in Rex’s driveway and someone drove into Rex’s fence: 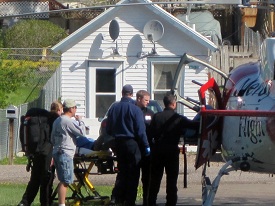 the fella might have been just a wee bit tipsy on his way thru. The local constabulary located the car and driver just up the street.. 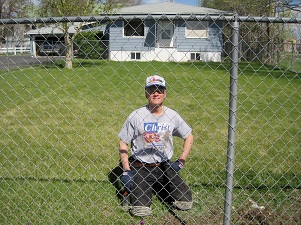 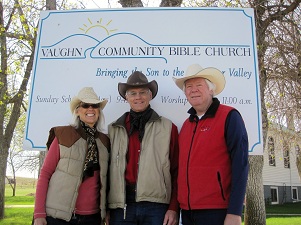 The church had a youth group (plus some parents and of course, us and Rex) get together. We had a lot of fun, ate hot dogs, swapped jokes and generally got acquainted with one another. 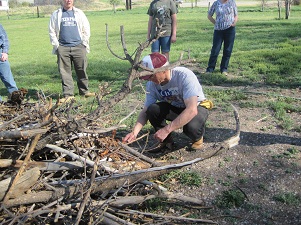 Rex starts a fire…we’re pretty sure this had nothing to do with the house fire later…we think. 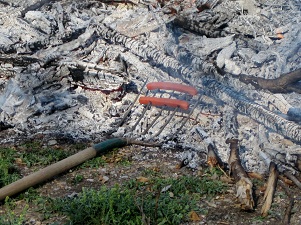 sizzling frankfurters… best not to ask about the pitchfork..just remember the sign at the gas station 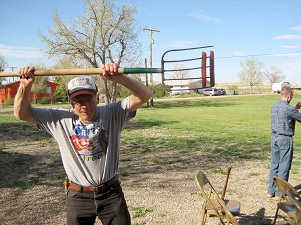 Some things are best left unasked.. 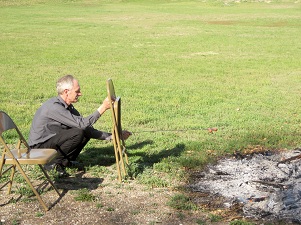 Rex at the town inquire concerning the house fire. 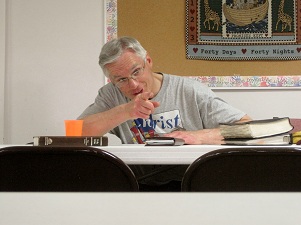 ..and explaining that the house fire couldn’t have been cause by the weenie roast..

(Actually the last two pic were from the Bible class Rex teaches, but the house fire thing was more fun.)

Rex fired up his trusty ole’ Honda and took us to town: 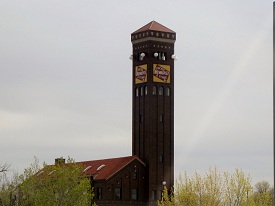 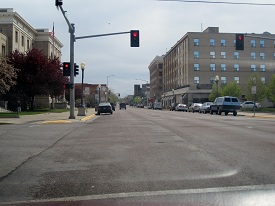 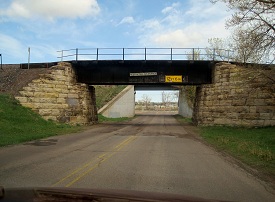 There is actually quite a bit more to Great Falls than the pictures show.

Great Falls is home to Malmstrom Air Force Base and the 341st Missile Wing. The 341st Operations Group provides the forces to launch, monitor and secure the wing’s Intercontinental ballistic missile (ICBM) and missile alert facilities.

About a mile east of Rex’s house is a actual Minuteman ICBM silo:

The road to it is right off I-15, which runs right by Vaughn. I was going to walk up to it but didn’t want any “black” helicopters coming my way. 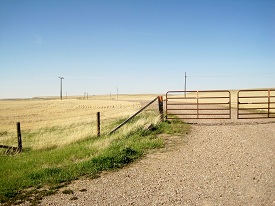 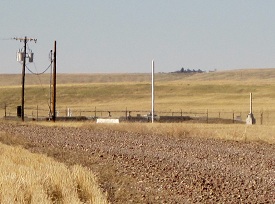 The other thing about is Great Falls is the falls on the Missouri River. Lewis and Clark (remember those guys) came here looking for Pocahontas – no that’s not right – Northwest Passage?  No, not that either. Oh Ya, Jefferson sent them out looking at what he bought. Anyway, Lewis was thrilled to see the enormous waterfall, the Great Falls of the Missouri. It was 900 feet wide and 80 feet high with a “beautiful rainbow” just above the spray. Lewis called it “the grandest sight” he “ever beheld.” Good thing he wasn’t sent to Niagara Falls or maybe the Grand Canyon.. 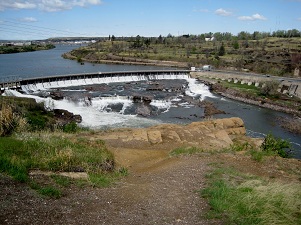 Great Falls of the Missouri River

Probably was more impressive before the dam was put in.

Great Falls is also home of the Roe River, according to Guinness Book of World Records the shortest river in the world, with a length of 200 feet: 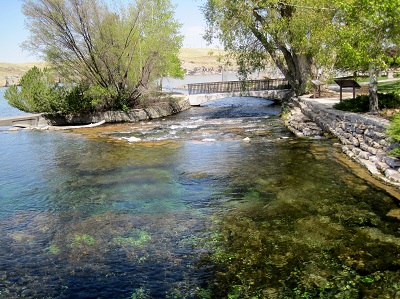 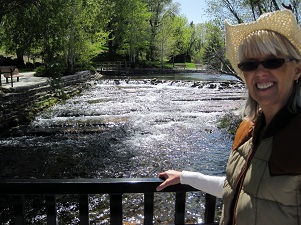 Starts out from Giant Springs (Its water has a temperature of 54 °F and originates from snowmelt in the Little Belt Mountains, 60 miles away. According to radiometric dating, the water takes almost 2,900 years to travel underground before returning to the surface at the springs.) 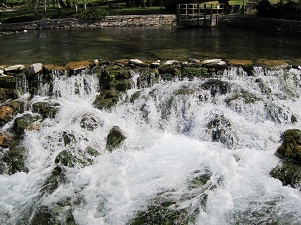 …and merges with the Mighty Mo 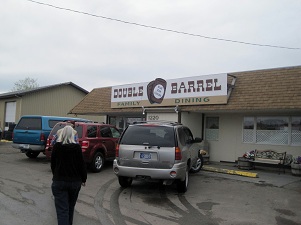 After all that excitement we needed nourishment.

Rex also took us to Fairfield, a little northwest of Vaughn. Where he used to pastor: 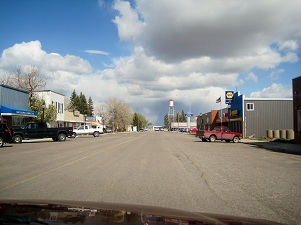 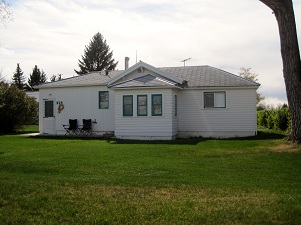 so he could check on the house he owns there…. 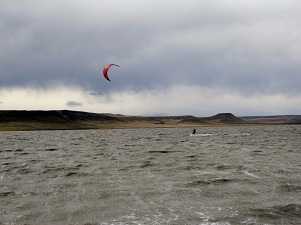 …and do some kite boarding.. 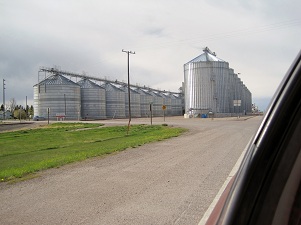 ..see the Anheuser-Busch bins … the taps on on the other side.

One of the goals I had coming west was to see buffalo (bison). I asked some of Rex’s good ole’ boy church friends about if there were any near: 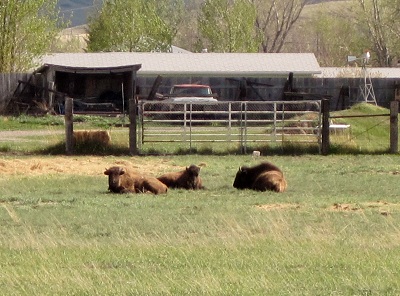 So they pointed me to tis farm/ranch…they also said that it was hard to keep buffalo.. I asked why?..they said because you have to feed them a lot.. if they get hungry they’ll wander off.. so I said they’re fenced in, right?..they said buffalo don’t do fences..they just walk through and keep on going.

Before we leave Rex and head for Wyoming I wanted to clear up a loose end from Oregon and the strange semi-truck trailers we were seeing. Rex’s neighbor is a retired trucker and he had one of the rigs parked at his house: 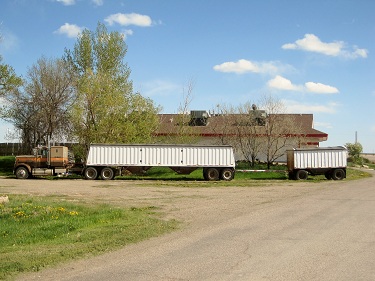 Notice the short little “pup” trailer attached to the rig with the real long tongue? I thought it might be to help get around the tight curves in the mountains but that’s not the story. Gov’t regulation is. The idea came about because of weight restrictions on roadways and this was the “work around”. The “regs” allowed for more weight if spread over longer axle distances and thus the “pup” with adjustable length tongue was born. Of course some of the tongues are so long that “clearance” lights are put on them to keep cars from driving between them. So there you have it mystery solved.

Some finial looks around Vaughn: 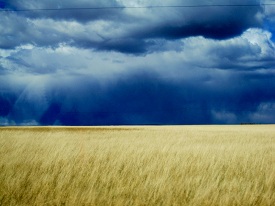 So as the sun dips slowly in the west we bid ado to brother Rex and hit the trail once more.

Up Next: Sioux and Cheyenne and Custer’s Roadside Stand